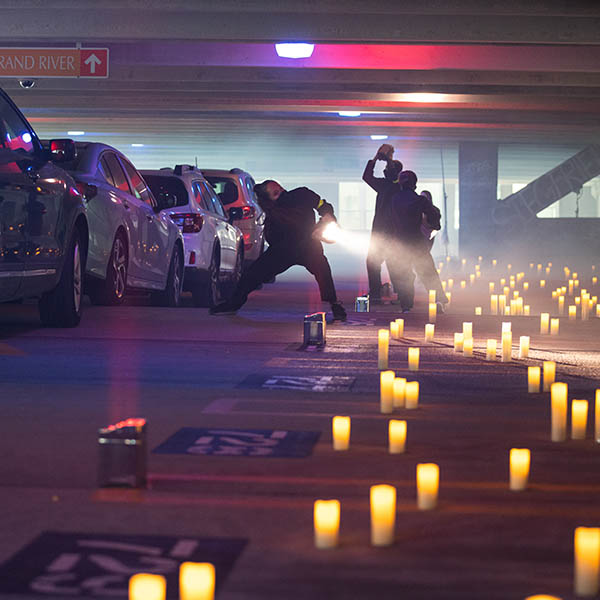 From the General Director

Welcome to an extraordinary adventure in the life of Lyric Opera of Chicago!

For more than a year, Lyric and every other opera company nationwide have confronted the dismaying reality of being unable to perform for live audiences in an opera house. The protocols in place due to the Coronavirus pandemic have compelled us to create streamed events, as well as performances in alternative spaces, employing formats far removed from what our audiences are used to experiencing. It has been truly heartening and inspiring that, during this profoundly difficult time, performers and creative teams have so brilliantly risen to the many challenges of presenting memorable work that successfully accommodates the very different world in which all of us in the performing arts are currently operating.

Last year, the pandemic prevented Lyric from presenting the premiere of our new production of Wagner’s Götterdämmerung and the three full Ring cycles that were to follow. It was wrenching for Lyric to have to abandon the Ring altogether, so we considered every possible way to perform any portion of it during this period of COVID. This led us to bring into the Lyric family the innovative director Yuval Sharon and the rest of the astonishingly gifted team that has created Twilight: Gods.

Recently appointed artistic director of Michigan Opera Theatre in Detroit (our artistic partners on Twilight: Gods), Yuval is the winner of the prestigious MacArthur Foundation “Genius Grant.” He’s also the first American to create a new production for Germany’s world-renowned festival of Wagner operas at Bayreuth. Sharon has radically reimagined Götterdämmerung/The Twilight of the Gods—the climactic fourth opera of the Ring—as a 70-minute series of installations that distill some of the core themes of Wagner’s massive work and concentrate on the central characters, as well as the decaying, corrupt society that they inhabit. Experiencing this remarkable event within the sprawling underground world of the Millennium Garages-Millennium Lakeside Parking Garage, with the music coming to you via your car radio, offers a unique and brand-new dimension to our art form.

I’m thrilled that our Twilight: Gods production includes the participation of one of the most dazzlingly talented figures on Chicago’s arts-and-humanities scene, the performer/writer/composer/producer avery r. young. We have a truly exceptional cast, including the magnificent Christine Goerke, a Lyric favorite who is acknowledged internationally as the leading Brünnhilde of our time; the remarkable tenor Sean Panikkar in his Lyric debut; and, making very welcome returns to the company, bass Morris Robinson, bass-baritone Donnie Ray Albert, and mezzo-soprano Catherine Martin. I’m delighted, too, that three gifted members of Lyric’s Patrick G. and Shirley W. Ryan Opera Center will portray the three Rhinemaidens.

Enjoy the spectacular ride that is Twilight: Gods!

Characters in order of vocal appearance:

Members of the Lyric Opera Orchestra

Students of the Joffrey Academy of Dance, official school of The Joffrey Ballet

The actors and dancers of Twilight: Gods

Lyric Opera of Chicago’s drive-through garage opera, Twilight: Gods, was a triumphant and safe return to in-person performances with a star-studded cast. In addition to the internationally acclaimed singers in the cast, there are several Chicago-based non-singing performers, as well.

Twilight: Gods isn’t your standard operatic production. This reimagined version of Wagner’s Götterdämmerung (Twilight of the Gods) took place underground in the Millennium Lakeside Parking Garage and critics and audiences alike loved the drive-through experience. Here are a few things you might not know about Twilight: Gods, some of which Lyric didn't even know until the company put together an opera in a garage!

Valhalla in photos: a journey through Twilight: Gods

Lyric Opera of Chicago's sold-out run of Twilight: Gods was described by critics as "unexpected and other-worldly" (Chicago Sun-Times) and as "a theatrical triumph that could hold its own in any era" (Musical America). The film version of the production comes out this summer free to all audiences, so before you buckle in for your virtual journey to Valhalla, learn more about the production by director Yuval Sharon through these photos.

Wait...this opera's in a parking garage?

Thanks to the brilliant mind of “opera’s disrupter in residence” (New York Times), Yuval Sharon, Lyric Opera of Chicago will present a radical reimagining of Götterdämmerung, the final chapter of Wagner’s Ring cycle with a sold-out run of Twilight: Gods. Say what? Michael Smallwood, Lyric’s technical director and VP, and Jackie Kane, Millennium Garages’ director of sales and marketing, are here to answer your questions.

The narration and text for the Chicago premiere of Twilight: Gods have been written and will be performed by Chicago poet and interdisciplinary artist avery r. young. It’s a perfect example of innovatively telling a story, with a local frame of reference, when circumstances don’t allow artists and audiences to gather in conventional performance spaces. Learn more about young as Lyric prepares to premiere his work on Twilight: Gods.

Over the past few years, you might have seen the name Yuval Sharon pop up in opera coverage in the Wall Street Journal, LA Times, Opera News, and other publications. You might have asked yourself, “Hmmm, what exactly is Hopscotch, A Mobile Opera in 24 Cars? And who came up with the idea?” Dubbed “opera’s disrupter in residence” by The New York Times, this acclaimed director has been making cultural waves since early in the new millennium and is making a splash with Lyric, as well.

A true dramatic soprano is perhaps the rarest voice on the international operatic scene. Without that voice, the largest-scale Wagner and Strauss works aren’t feasible to produce at the highest level. When a dramatic soprano comes along with the necessary vocal beauty, power, and size, matched by extraordinary musicality and electrifying stage presence, the result is world renown. That’s what happened in the stupendous career of Christine Goerke.

Philosophy and the Ring

Two philosophers popular in his time clearly guided Wagner as he shaped and reshaped his Ring. In the end, though, Wagner created a tragic drama that is all his own, focusing on the nature of love, its glory and its tragedy.

Christine Goerke on singing the Ring

The Dallas Morning News has hailed soprano Christine Goerke as “the Brünnhilde of dreams." Goerke is no stranger to Wagner, having played the role at Lyric in both Die Walküre (2017/18) and Siegfried (2018/19), and in Ring cyclees around the globe. As she steps into Brünnhilde once again for Lyric's Twilight: Gods, here is what she has to say about singing the Ring.

Ride of the Spectators: Out of the Opera House and Into the Car

Megan Steigerwald Ille, PhD, takes a look at how opera American companies are taking opera beyond the opera house and into non-traditional spaces in the 21st-century and what it means for the art form.

Richard Wagner and the journey of the Ring

The influence of Richard Wagner (1813–1883) is evident in the tone poems of Richard Strauss and the film scores of John Williams, and spreads beyond composition into philosophy, literature, the visual arts, theater, and film. Learn more about the composer and the creation of his epic Ring cycle in this article from Austin Stewart, PhD.

Airing out Wagner's Götterdämmerung: Wagner in the Age of Coronavirus

In the years around 1850, Richard Wagner conceived of opera in entirely new terms. He envisioned fusing every art form into what he called “music drama,” or the “total work of art.” In essays describing this novel form of opera, the composer used environmental, atmospheric, and climatic language to describe “music drama” as an analogue of the Germanic climate and as an “atmospheric ring of art and nature,” his music the “breath” of Germanic nature.

Listening and Watching: Götterdämmerung (Twilight of the Gods)

Receive 12 hours of free parking every Monday at any four garages when you register online. Those who register will receive a single barcode which is good for ten (10) free 12-hour Mondays now through Monday, December 27, 2021. In addition, you will receive a barcode with a special discounted rate for 12 hours valid at any four of our garages, any day of the week!!

Your barcodes will expire once you have exhausted your 10 Mondays or on 12/27/2021, whichever comes first. Combine your free Monday barcode with our All Access Daily Card

We invite Twilight: Gods audiences to sign up to guarantee a discounted $12.95 rate valid at all four of our garages for up to 12 hours.

Consider a gift to Lyric through your will, trust, or IRA. It costs nothing during your lifetime and leaves a lasting legacy.

We are extremely grateful for your donations. Large or small—every dollar makes a difference. In addition to their generous donations, more and more Lyric patrons are also choosing to support the future of Lyric with a legacy gift commitment.

A legacy gift commitment in your estate or financial plan is an easy and affordable way to ensure the future of opera. Some gifts can be made by simply signing a form with your IRA administrator or adding a sentence to your will or trust.

Once you have made such a legacy gift commitment, we would be honored to welcome you into Lyric's Ardis Krainik Society. When you join this legacy society, you become part of a like-minded community that is committed to making the magic of opera available for generations of audiences to come.

Please contact out Gift Planning office directly to discuss the benefits of becming a member of the Ardis Krainik Society.

Twilight: Gods is a project of Lyric Unlimited and is generously sponsored by

Twilight: Gods is a collaboration between Lyric Opera of Chicago and Michigan Opera Theatre.

Adapted from Richard Wagner's Götterdämmerung (Twilight of the Gods)

The American Guild of Musical Artists (AGMA) is the Union that represents the singers, dancers, actors, and staging personnel at Lyric Opera of Chicago.