Siegmund and Sieglinde are the mortal children of Wotan, king of the gods, and are separated early in their lives. In a storm, Siegmund seeks shelter in the home of Sieglinde and her husband, Hunding. The siblings recognize each other, fall in love, and run away together. Fricka, Wotan's wife and goddess of marriage, is appalled, and insists that Wotan side with Hunding, against his son. Wotan orders his Valkyrie daughter, Brünnhilde, to inform Siegmund that he will lose in his battle with Hunding. Impressed by Siegmund's courage, Brünnhilde disobeys by supporting him in the fight, but Wotan intervenes and Siegmund is killed. The distraught Sieglinde is ecstatic upon hearing from Brünnhilde that she is carrying Siegmund's child, Siegfried. The Valkyrie helps Sieglinde to escape Wotan's wrath, but Brünnhilde submits to her own punishment: Wotan puts her to sleep on a fire-surrounded rock, where only the world's bravest hero will be able to reach her.

“Hojotoho!” (Ride of the Valkyries)

The Valkyries exuberantly assemble, several of them bringing
fallen heroes from earth to defend the gods' fortress, Valhalla.

Die Walküre: A Tug at the Heart 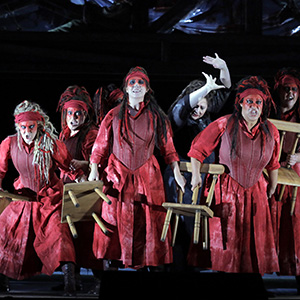