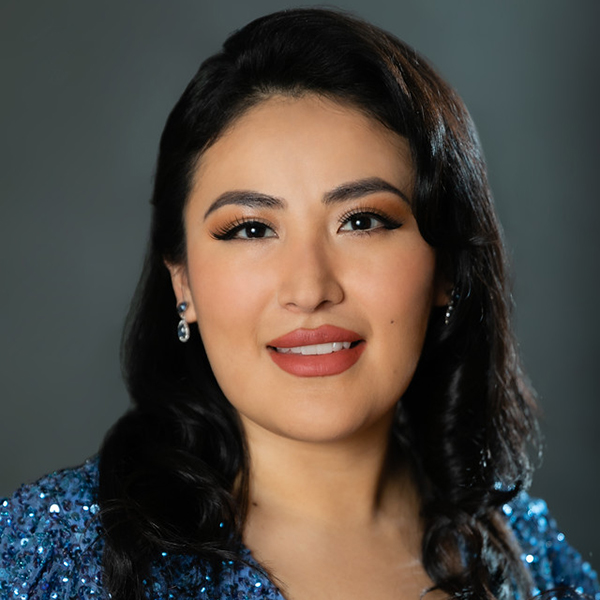 Denis Vélez is sponsored by The C.G. Pinnell Family.

Third-year soprano Denis Vélez, from Puebla, Mexico, was a national winner of the 2020 Metropolitan Opera Laffont Competition. In the National Singing Contest Carlo Morelli (whose previous winners include such renowned Mexican singers as tenors Ramón Vargas, Rolando Villazón and Javier Camarena), her performance earned her the First Prize, the French Opera Award and the Francisco Araiza Special Award. Vélez’s repertoire includes the Countess and Susanna/The Marriage of Figaro, Bastienne/Bastien und Bastienne, Fiordiligi/Così fan tutte, Adina/The Elixir of Love, and Mimì/La bohème. Prior to her arrival in Chicago, Vélez was a member of the National Opera Chorus at Mexico City’s internationally celebrated Palacio de Bellas Artes. The soprano holds a bachelor’s degree in operatic singing from Mexico’s Superior School of Music. Among her appearances in Chicago is the Beyond the Aria series at the Harris Theater, for which she performed alongside Joyce DiDonato.

For the 2021/22 season, Vélez sang in Sunday in the Park with Lyric’s Rising Stars and as the Third Apparition/Macbeth, Giannetta/The Elixir of Love, and Papagena/The Magic Flute.

During the 2022/23 season, Vélez will appear in Don Carlos, Hansel and Gretel, and Carmen.