If you're an opera audience member who is thrilled by the power of a full chorus blowing your hair back with sound, then you're no stranger to the wonder of Verdi. From the grandeur of Aida to the famed drinking song in La traviata, and the unforgettable sounds of the Anvil Chorus of Il trovatore, Verdi's choruses are among the most memorable moments in his operas.

The stupendously exciting first-act finale of Verdi's Luisa Miller shows what an impact the chorus can make in a Verdi opera. Walter, father of Luisa's beloved Rodolfo, has just placed Luisa and her own father, Miller, under arrest. Miller, Rodolfo, Walter, and finally Luisa herself express their feelings about this, one after the other. Then, just as Luisa finishes, the chorus – her devoted friends and neighbors in the village – bursts into the musical picture with their response: "Her weeping forces us to tears. Her grief breaks our hearts!" 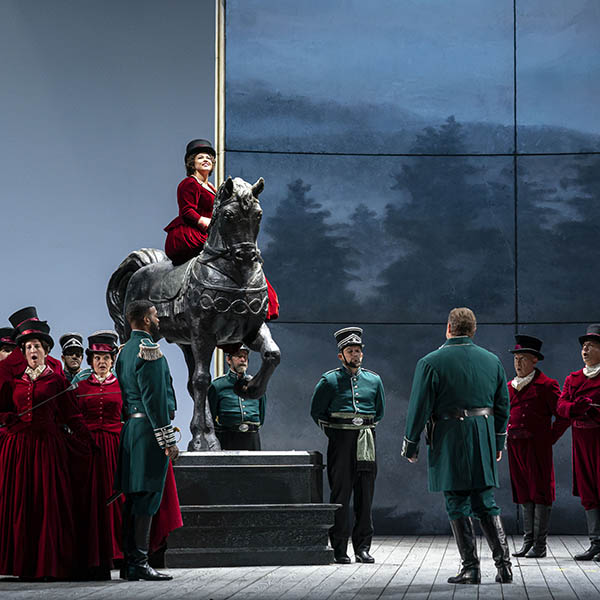 At that point, the music instantly takes on a grandeur that is uniquely and thrillingly Verdian. The chorus provides the foundation for the second half of this glorious ensemble, over which Luisa (soprano) and Rodolfo (tenor) are able to soar. The end of the ensemble invariably provokes a storm of enthusiastic applause from the audience.

Verdi asks a lot of any chorus, especially when it comes to the variety of characters they're required to portray in so many difficult settings, from Tyrolean villagers in Luisa Miller to courtiers in Renaissance Mantua (Rigoletto), priests and handmaidens in ancient Egypt (Aida), sophisticated Parisian partygoers (La traviata), and so much more. Verdi required the chorus to become real actors, creating a very specific environment within which the principals' drama can unfold.

Purely musically, the variety of Verdi's writing for chorus is marvelously satisfying for audiences. Verdi choruses give us every possible mood, which means the choristers need to color their sound with a special awareness of the drama. The dark, exhausted tones of the oppressed refugees in Macbeth, the exhilarating sparkle of Violetta's guests in La traviata, the machismo of the soldiers in Il trovatore, the serene dignity of the monks in La forza del destino and Don Carlos – the list goes on and on. (And that's just in opera – Verdi also wrote the Requiem, one of the most gloriously beautiful and stunningly moving choral pieces in the repertoire.) With any Verdi chorus, count on a very special musical experience!

Luisa Miller is the first installment in Lyric's ongoing Early Verdi series. Written just before three of Verdi's most well-known operas (Rigoletto, Il trovatore, and La traviata), it hints at the styles and melodic structures that would come to exemplify his middle period.

Led by music director designate Enrique Mazzola, this production is an Italian opera lover's dream. Experience the rousing choral scenes and intimate dramatic moments that have come to be closely associated with Verdi. Luisa Miller is onstage October 12-31 with Krassimira Stoyanova, Joseph Calleja, Ryan Opera Center Alumni Quinn Kelsey and Christian Van Horn, Soloman Howard in his Lyric debut, Alisa Kolosova, along with the full power and grandeur of the Lyric Opera Orchestra and Chorus.

This electrifying work is a feast for all devotees of Verdi and Italian opera.

Learn More
Back to top