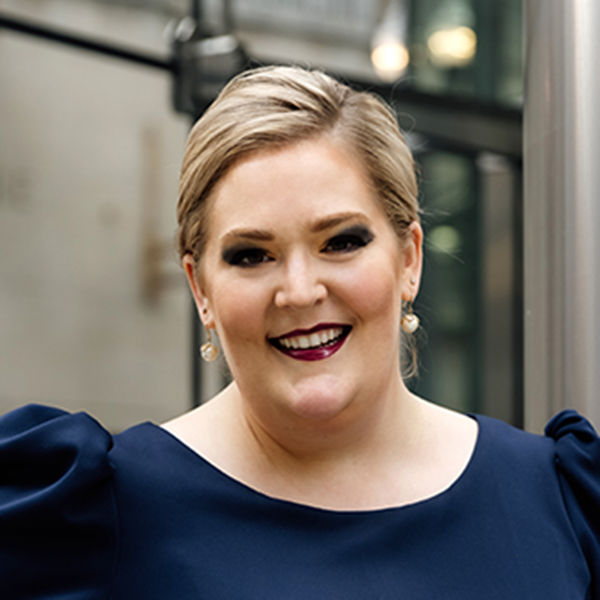 Mathilda Edge is sponsored by Maurice J. and Patricia Frank.

Third-year soprano Mathilda Edge, originally from Chandlerville, Illinois, is an alumna of Indiana University’s Jacobs School of Music, where she earned her master’s degree in Vocal Performance. She is the recipient of a 2019 Sara Tucker Study Grant from the Richard Tucker Music Foundation. She has also won or placed in the Washington International Competition for Voice; National Association of Teachers of Singing Artist Award Competition; Indiana District and Central Region Metropolitan Opera Eric and Dominique Laffont Competition; Houston Grand Opera’s Eleanor McCollum Competition; and Opera Columbus’ Cooper-Bing Competition. Edge has sung in concert with The City Choir of Washington, New Dominion Chorale, and the Bel Canto Chorus. She has performed as Fiordiligi/Così fan tutte, First Lady/Die Zauberflöte, Sandman/Hansel and Gretel, Romilda/Xerxes, The Milliner/Der Rosenkavalier, and Cio Cio San/Madama Butterfly. As a member of the Merola Opera Program, Edge sang an extended scene as the title role/Thaïs for the Schwabacher Summer Concert, as well as a selection from I vespri siciliani in the Merola Grand Finale. A Santa Fe Opera Apprentice Artist in 2018, the soprano covered the title role/Ariadne auf Naxos that summer.

In Lyric’s 2019/20 season, Edge sang Berta/The Barber of Seville. Her 2021/22 Lyric appearances include Sunday in the Park with Lyric’s Rising Stars as well as Lady in Waiting/Macbeth and First Lady/The Magic Flute.