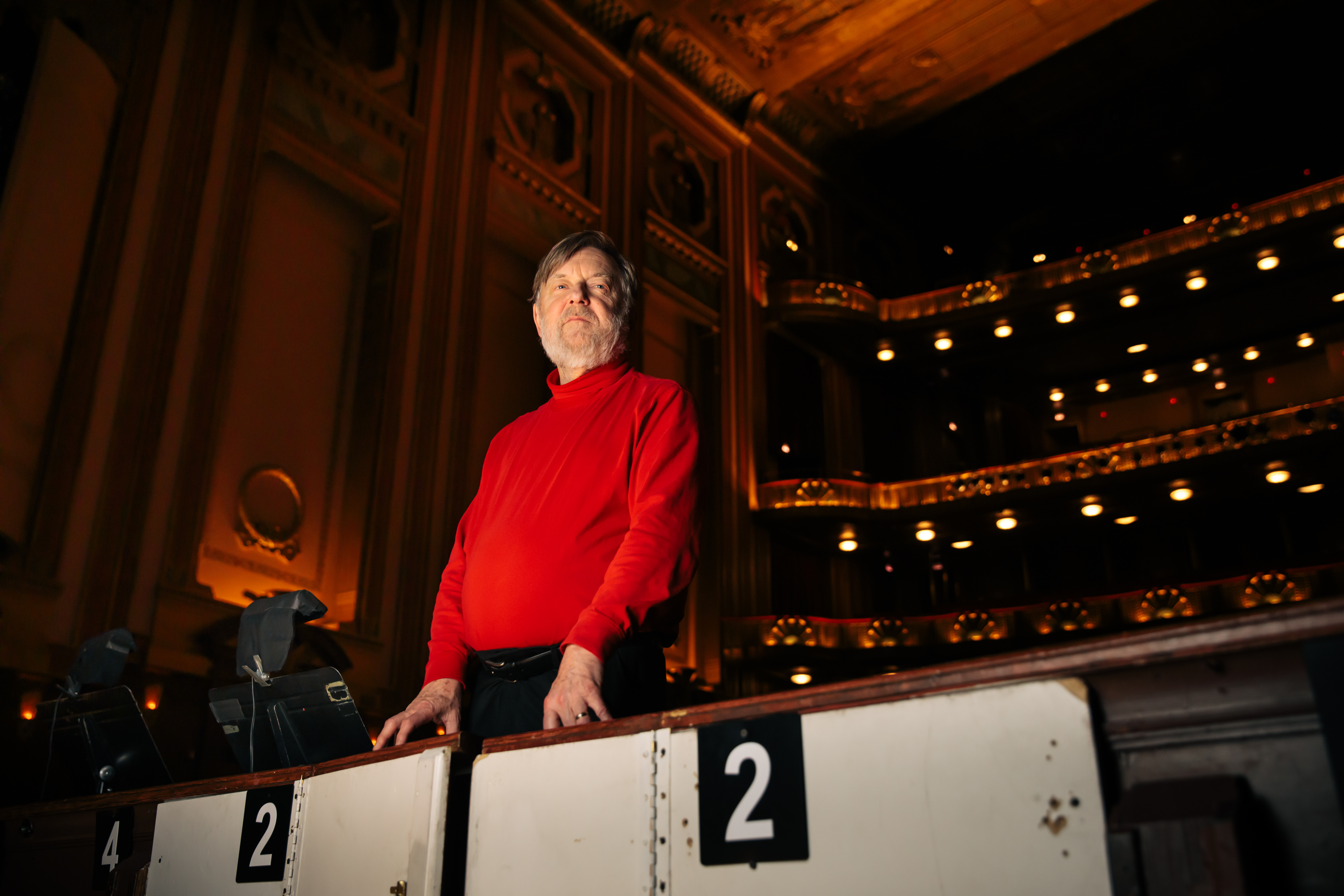 With the opera and concert world currently on an unintended and unwelcome hiatus internationally, Sir Andrew Davis has time to reflect. He’s in Chicago until late May, after which he’d been scheduled to spend the summer appearing with the Toronto Symphony Orchestra, Melbourne Symphony Orchestra, and BBC Philharmonic. At the moment it’s not certain whether those performances will take place.

Rather than dwelling on what isn't happening, Sir Andrew is looking to Lyric’s next season. He’ll be back for three contrasting operas, as well as a special concert commemorating the conclusion of his 21-year tenure as music director.

First up for Sir Andrew in late September is the North American premiere of Sir George Benjamin’s Lessons in Love and Violence. “I love George’s music,” he declares, recalling that he conducted the second performance of the composer’s first piece for orchestra. “He has an extraordinary orchestral imagination and incorporates unusual instruments.” Sir Andrew mentions the Hungarian zither known as the cimbalom, which figures in the score of Lessons.

The conductor admires Benjamin’s music for its complexity: “That can sound rather daunting, but it’s not – the orchestral textures contribute very much to the psychological aspects of the drama. If you think of Wagner and Strauss, it’s exactly what they did, also Debussy and Berg. That’s something that’s been missing to a certain degree in the works of more recent composers. It doesn’t mean it’s hard to listen to – it has depth. George also wrote Written on Skin, an opera that’s been done all over the world. He writes beautifully for voice.”

Sir Andrew calls Lessons in Love “a political thriller. Its message – the idea behind the title – is that the king’s children are exposed to treachery and calculated behavior, and at the end of the opera the son shows he’s absorbed all these nefarious lessons. Evil breeds evil. Dramatically the relationships between the characters are very clear and psychologically compelling.”

Maestro Davis’s second Lyric production of 2020/21 will be Mozart’s The Marriage of Figaro, a work closely associated with him from the beginning of his Lyric career (he’s led it here in 1987/88, 1991/92, 2003/04, and 2009/10). This opera has never ceased to captivate him: “One of the marvelous things about being a recreative artist is that, if you’re lucky, you have new insights and intuitions and discoveries every time you return to a piece, however many times you’ve done it. Mozart’s operas are so astonishing – the characters come alive in a way that’s quite amazing. Mozart’s characters and their music tell us exactly who these characters are. The music is so tailored and defining of the personalities.”

In repertory with Figaro, Sir Andrew will lead Stravinsky’s The Rake’s Progress, in the famous production with sets by the legendary artist David Hockney that originated at Glyndebourne. This is one of Sir Andrew’s absolute favorite operas, but one he’s led surprisingly infrequently up to now (“I did conduct it at Glyndebourne once or twice”). He relishes the clever text by W. H. Auden and Chester Kallman, “one of the greatest libretti ever.”

Sir Andrew declares unequivocally, “You don’t need to do a lot of homework before seeing this opera. It speaks to you so immediately in its witty moments and in the last scene, which is intensely moving, when Anne Trulove visits Tom Rakewell in [the insane asylum] Bedlam and he doesn’t recognize her. The music is so beautiful, and the choral contribution is just amazing.” Sir Andrew anticipates that the whole score “will certainly be fresh to the ears of people who haven’t heard it before.” What’s most important to him is that this is an opera where the audience leaves “feeling entertained. It’s an exuberant piece, full of wit and charm, but also pathos. It really has everything!”

You don’t need to do a lot of homework before seeing this opera. It speaks to you so immediately in its witty moments and in the last scene, which is intensely moving...

Having formed a terrific working relationship in Britain with English tenor Andrew Staples (Tamino in The Magic Flute at Lyric four seasons ago), Sir Andrew is “absolutely thrilled” that The Rake’s Progress will star Staples in the title role of Tom Rakewell, which he sang with Sir Andrew at the Edinburgh International Festival. He’s just as excited that Janai Brugger, Luca Pisaroni, and Alice Coote will all return to Lyric for the Rake production.

The rest of the season’s repertoire also delights Sir Andrew. Cavalleria rusticana and Pagliacci are “the ultimate in verismo! They’re quite different in style, but each is so full of red wine and pulsing passions, plus wonderful tunes. Red-sauce Italian – both irresistible!” In contrast, there’s also the romantic comedy, The Elixir of Love, “one of the most delicious operas ever, Donizetti at his very best, with great opportunities for singers to show how vocally athletic and how expressive they can be.”

There are three other large-scale works: Verdi’s Attila (“I’m very excited about our series of early Verdi operas, and it’s been two decades since we did this one”); Puccini’s Tosca (“It’s fantastic – the ‘Te Deum’ at the end of the first act shows you what a supreme master of the theater Puccini was”); and Saint-Saëns’s Samson and Delilah, which Sir Andrew calls “the biggest show of the season, and full of wonderful orchestral writing.”

The concert honoring Sir Andrew will feature Lyric’s first performance of Beethoven’s mighty Symphony No. 9, the “Choral.” Sir Andrew first led it in the early 1970s, with London’s Philharmonia Orchestra (“it was broadcast live to the whole EU – no pressure!”). He’s lost track of how many times he’s conducted it since – “maybe 15, maybe 20, over the course of 47 years.” The final movement, Beethoven’s celebrated “Ode to Joy,” has “such a powerful message that will always be supremely relevant to our world, particularly now. All men being brothers is a message that we all need more than ever. The greatest challenge for me in this piece is putting that message across with the greatest power and imagination.”

All men being brothers is a message that we all need more than ever. The greatest challenge for me in this piece is putting that message across with the greatest power and imagination.

The 9th Symphony – or, at least, its “big tune” – will be familiar to the audience, but what is remarkable, declares Sir Andrew, is “the piece’s progress through the first three movements. The first is quite stern and searching, with a relentless energy behind it, which Beethoven continues in the scherzo. Then comes the slow movement, which starts with a simple passage in the strings and allows the movement to flower – that’s the secret of that movement. And then there is this huge gesture of rejecting everything he’s said so far – first by the cellos and basses, then the bass soloist, saying, ‘No, not these sounds – we must look for something else,’ followed by the many different sections of the finale.” The whole piece is “a huge departure for Beethoven. Like so many works we know so well, if you were listening for the first time your hair would stand on end! I’d like to conduct a performance that makes people feel like they’ve never heard it before.”

Preceding the 9th will be the world premiere of a new work by the conductor’s son, Ed Frazier Davis, one of America’s most promising young composers. “It’s a tough assignment – a choral piece, sung a cappella. He and I are both thinking about texts. You can expect something that, in terms of its message, will resonate with the Beethoven. The concert is April 10, 2021, between the two final Figaros. I’ll have to eat my Wheaties!”

It’s a tough assignment – a choral piece, sung a cappella.... The concert is April 10, 2021, between the two final Figaros. I’ll have to eat my Wheaties!

Thinking about how the Lyric Opera Orchestra and Chorus have evolved during Sir Andrew’s two-decade tenure as music director, “it’s hard to talk about that without sounding too pleased with yourself! But when you compare the orchestra now to the orchestra from 2000, there’s a huge difference. It was always a very good orchestra, but the level of individual and collective accomplishment is at an extraordinary high level.”

Lyric’s canceled Ring cycle is, of course, very much on Sir Andrew’s mind. “We’re all absolutely heartbroken. It’s been a very successful production, and Götterdämmerung would have been terrific. For me, the great disappointment is that the world won’t get to hear the Lyric Opera Orchestra play this entire score at this time.”

Sir Andrew’s warmest memories of the Ring include “Christine [Goerke]’s Brünnhilde, Eric [Owens]’s Wotan and Wanderer, and so many moments from the orchestra, from the very opening bars of Das Rheingold with the horns winding up from the depths of the Rhine, to the fire music at the end of Die Walküre. Our orchestra plays so superbly!” He remembers, too, “silly things like Loge singing a couple of lines next to me in the pit – [tenor] Štefan Margita is such a character – and the Rhinemaidens and Valkyries swooping over me on the camera dollies. There were so many wonderful physical things about the production. And of course, our Siegmund, Brandon Jovanovich, bringing eggs and honey from his farm to rehearsals!”

Through the timeless power of voice, acting that brings characters to life in triumph and tragedy, the splendor of a great orchestra and chorus—coupled with theater, dance, design, and truly magical stagecraft—Lyric transports you to worlds both familiar and unexpected, leaving us all thinking and feeling differently long after the curtain comes down. Don’t miss a moment: secure your place for Lyric’s 2021 Season of grand opera, chamber opera, special events, and musical theater.