This is your all-access pass to the world of opera and musical theater. Scroll down to access the following resources to help you learn more.

In any great opera, the music tells the story as much as the action onstage, reflecting the personalities of the characters, their emotions, and the situations they’re in. The Magic Flute also has musical variety to rival or surpass any full-fledged opera, ranging from folk and popular styles of Mozart’s day to music he could have written for the royal court.

Strictly speaking, The Magic Flute isn’t an opera. Rather, it is an example of a “sung-play” (Singspiel in German) and is similar to the modern Broadway musical. Unlike opera of the day, which was usually in Italian, Singspiele were in the audience’s native language (German), and the dialogue was spoken rather than sung—they were plays with musical numbers.

Despite Mozart’s fame, genius, and ease in the world of the elite, he had a huge sense of humor and loved a good time. It’s clear that he had a lot of fun composing The Magic Flute and he wanted the audience to have fun with it, too.

The Magic Flute begins with an orchestral overture. The idea of an overture is to musically hint at what’s coming and reveal key aspects of the story. In a subtle way, Mozart is trying to tell us that the story will involve two very different ways of thinking and being. It begins with a short sequence of heavy chords, the mood becomes dark, and the music seems to wander without a clear direction. 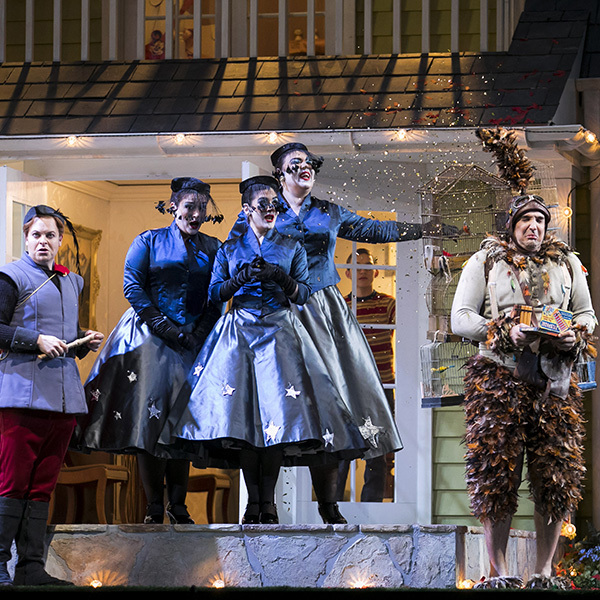 After a time, the style abruptly changes to an orderly and academic musical form: a fugue (pronounced fyoog). As you’ll hear, a fugue is built on a melody that is repeated and passed around the orchestra in overlapping and interweaving layers, creating a complex but structured effect.

Mozart may have chosen the styles of these two contrasting sections—the formless opening and the fugue that follows—to represent the two contrasting realms depicted in the opera: the Queen of the Night’s unenlightened realm versus Sarastro’s realm of light and wisdom. 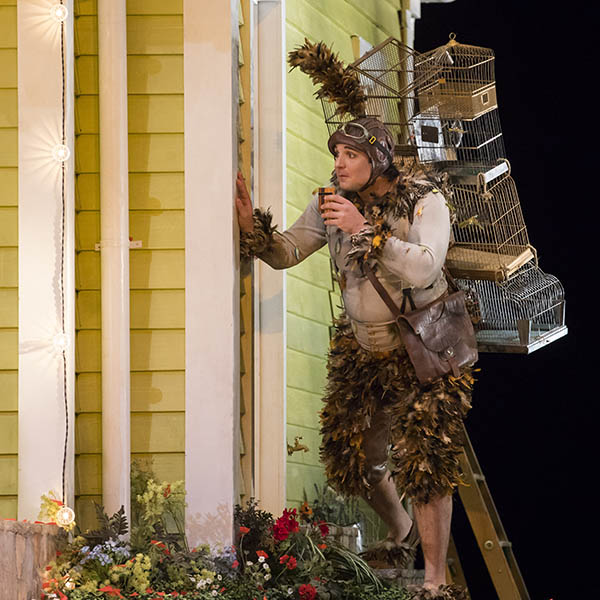 Papageno’s first appearance is handled in a typically operatic way: with an aria in which he tells us who he is and what he’s about.

His words tell us:
• His occupation: catching birds for trade
• He’s famous for catching birds
• He’s happy (with one exception)
• He wants to get married, but he has no idea how to make that happen

Papageno’s music also tells us a lot about him: the melody is folksy, simple, and cheerful.

Listen to the shape and structure of the tune:
• Easy scale patterns
• Series of repetitive phrases, all of the same length
• Range is relatively narrow—it never goes very high or very low.

Papageno punctuates his aria with a five-note scale. It’s a birdcall he plays on an ancient folk instrument, the panpipes. Besides helping attract birds, that call is his musical trademark for the rest of the opera. 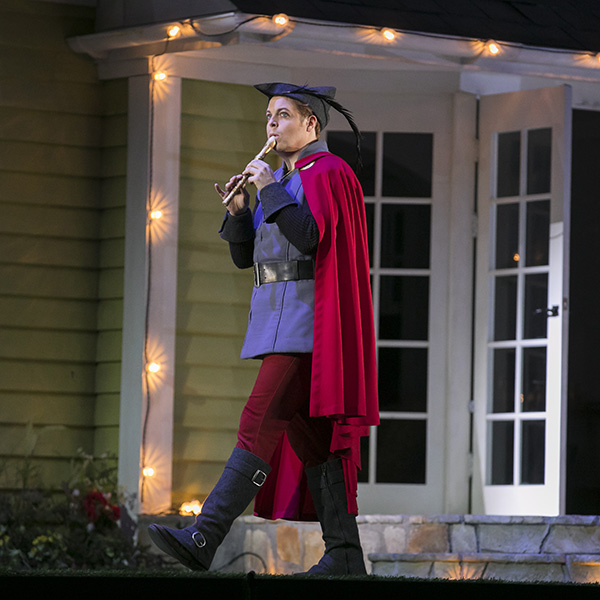 Tamino’s big hit aria is early in Act One, when he first looks at the picture of Pamina. The tempo is stately and dignified, and the melody covers a wide range and has many leaps. Note, Mozart had the orchestra playing the melody along with Papageno, Tamino sings his melody with minimal accompaniment. This showcases the beauty and refinement of his voice. 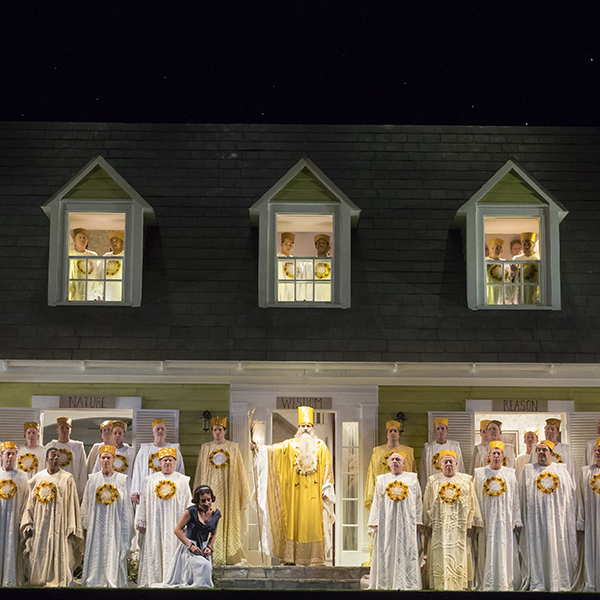 Sung by Sarastro and his priests

It’s pretty typical in opera for the hero to be a tenor, like Tamino. Roles for basses aren’t always as glamorous, but it’s fairly common for them to be mature authority figures. Sarastro is a classic example.

Act Two begins with a solemn gathering of Sarastro and his priests. During this meeting, Sarastro leads a prayer to the central deities of their faith: Isis and Osiris—gods the librettist Emanuel Schikaneder borrowed from ancient Egyptian mythology. Even though it’s not a regular church service, Mozart created music for it that has a distinctly “church-like” feel. 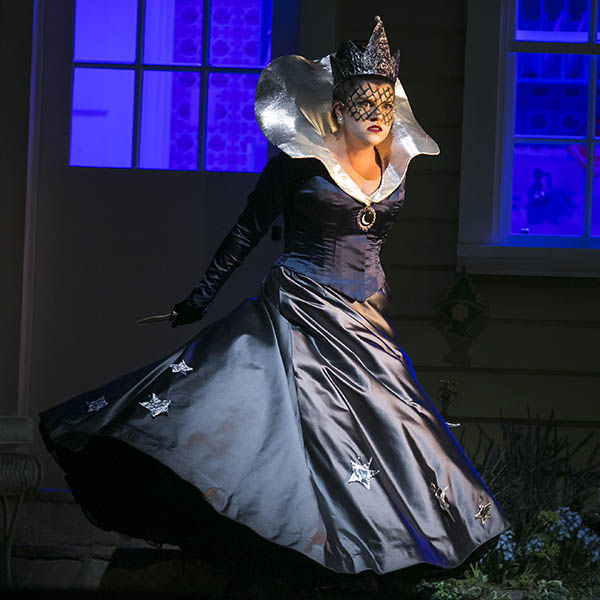 Sung by the Queen of the Night

If psychosis counts as a personality trait, then the character with the biggest personality in The Magic Flute is the Queen of the Night. She has two major arias, and the second one is her claim to fame. In fact, it’s one of the most famous soprano arias in all of opera. She’s demanding that her daughter, Pamina, murder Sarastro.

In Mozart’s day, extreme emotional states (joy, rage, grief, etc.) were often expressed in opera through coloratura. Essentially, coloratura is a fast string of notes sung on a single syllable of text or no text at all. This type of singing, like the Queen of the Night, takes acrobatic vocal technique that only certain singers, coloratura sopranos, can master.

The Queen may be the most challenging coloratura role ever written. Only a few singers in the world have the vocal agility and accuracy—and high notes—combined with the emotional intensity needed to fully express the Queen’s rage. 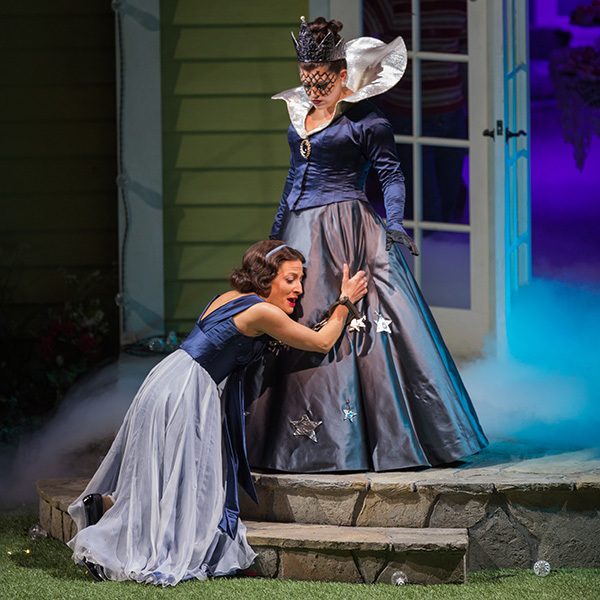 Along with the pressures of having a mother like the Queen, Pamina is also in deeply in love. Through most of the opera it seems that she’s destined for nothing but heartbreak and sadness.

The last straw for Pamina comes when she’s reunited with Tamino only to have him refuse to speak to her. In response to this seeming rejection, she sings one of the most beautiful and touching arias of the opera.

Mozart makes her royal status clear in the music, just as he did for Prince Tamino. Notice the similarity in musical style to Tamino’s picture aria in Act One:
• Minimal accompaniment so the voice shines
• Melodic line that’s fully operatic:
o Many leaps
o Wide range from high to low notes

But more than anything, this aria is both very sad and beautiful. 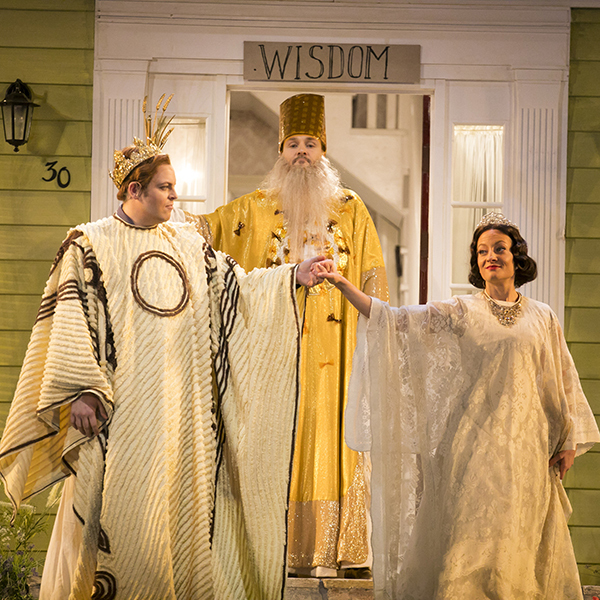 Sarastro and his followers

Tamino and Pamina have succeeded and are united at last, and Papageno has finally found a wife. The ending of The Magic Flute is certainly happy, but something more serious has happened as well: Sarastro’s realm of light and wisdom has won out over the Queen of the Night’s darkness and evil. So, the opera ends with a powerful and dignified chorus.

But does Mozart end it on this serious note? No way. Remember, he loved a good time. At the very end, he lightens the mood and finishes the story with a lively tune that sounds like a rustic dance.

Musical examples are from the EMI Classics recording featuring Peter Schreier as Tamino, Anneliese Rothenberger as Pamina, Edda Moser as the Queen of the Night, Kurt Moll as Sarastro, Walter Berry as Papageno, and the choir and orchestra of the Bayerischen Staatsoper München conducted by Wolfgang Sawallisch.

These recorded excerpts are used courtesy of Warner Classics, the Official Education and Promotion Music Provider of Lyric Opera.
Commentary by Jesse Gram.

Learn more about this opera and events in the world at the time it was written.