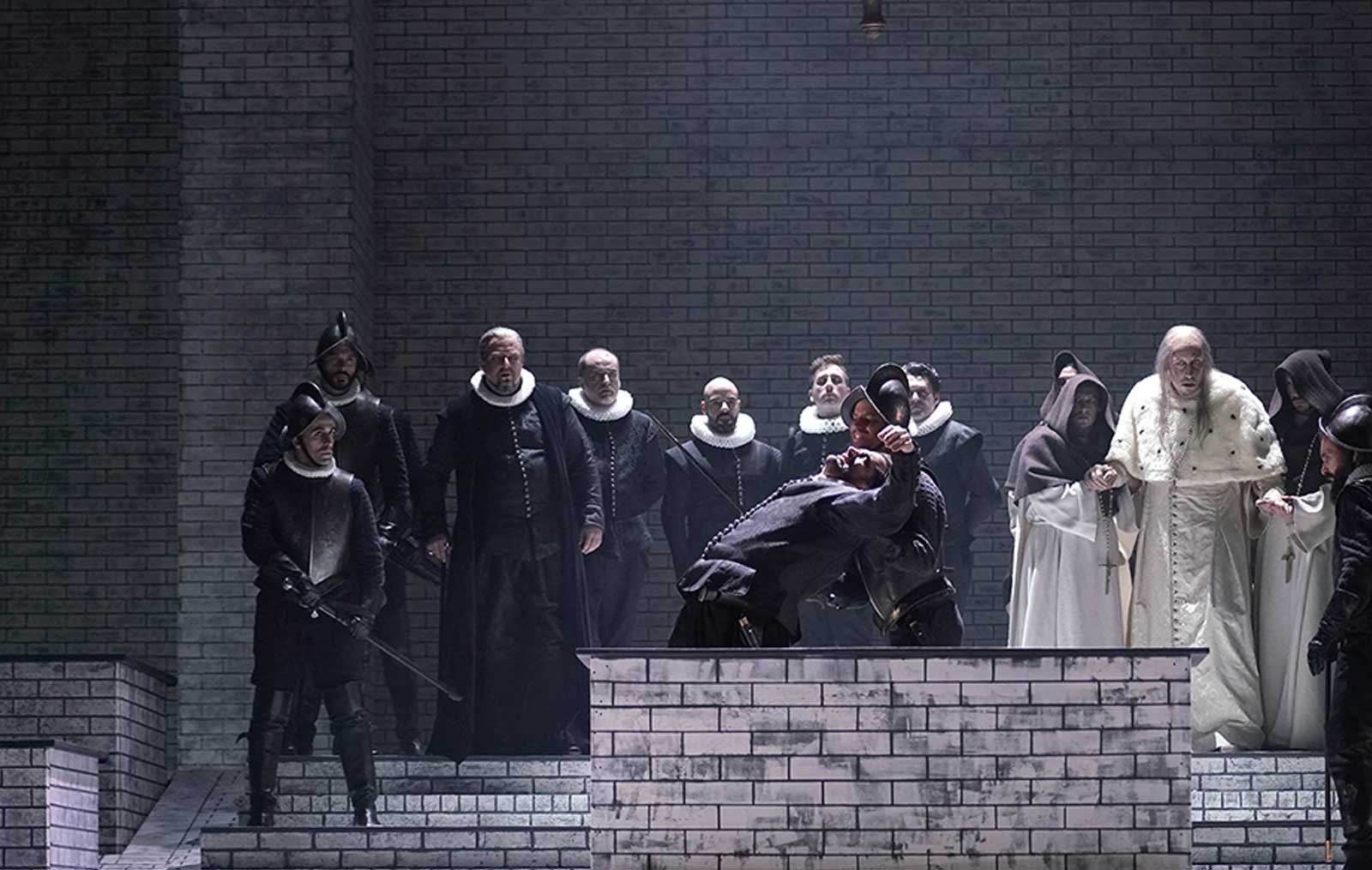 What you need to know about Verdi's Don Carlos

CHICAGO (10/4/2022) — In another first this season for Lyric Opera of Chicago, the company presents the 1886 five-act version in French of Verdi’s epic masterpiece Don Carlos — a tour-de-force experience for opera lovers — for five performances only, November 9–25, 2022.

Based on the historical characters and events of the Spanish Inquisition but with a dramatic political storyline seemingly ripped from today’s headlines, Don Carlos features some of Verdi’s most beautiful music, woven together with a story of love, royalty, and revenge. This epic tale is brought to life on a musical and dramatic scale that only Lyric can deliver.

While the Italian-language four-act version of Verdi’s masterwork has been presented at Lyric six times in the company’s history (most recently in 1996), this is the first time the five-act version in French, in Verdi’s final revisions, will be performed on the Lyric stage. "My dream of bringing to Lyric audiences their first five-act, French-language Don Carlos began more than a decade ago as I began my appointment at Lyric," says Anthony Freud, Lyric’s general director, president & CEO. "Don Carlos most brilliantly represents Verdi’s ability to psychoanalyze characters and motivations through music and to illustrate and explore the conflict between public responsibility and private passions."

"I feel that Don Carlos has a different personality when it is performed in French," continues Freud. "There is greater translucency to the music, and singers can approach both the music and the text in different ways. It is also a true reflection of Verdi’s commitment to the French language as the original language of Don Carlos and as the language in which he made all his revisions. To me it is a true pinnacle of Verdi's legendary output as a composer, and I can’t wait for Chicago opera lovers to discover this side of Verdi’s genius."

Lyric’s world-renowned musical forces led once again by Enrique Mazzola. Following his success with the season-opening performances of Verdi’s Ernani, Lyric Music Director Enrique Mazzola conducts the Lyric Opera Orchestra in interpreting Verdi’s majestic score. While Mazzola is a perfect match for the expansive scale and rich orchestration of Don Carlos, he will also showcase a different side to his musical leadership while also conducting performances of Rossini’s light and frothy Le Comte Ory at Lyric during the same time period.

A brilliant cast of six Olympic-caliber singers. Don Carlos should only be presented when an opera company can cast the right six singers to portray the divine hopes, glorious dreams, and fatal destinies of the six principal roles. Bringing these iconic characters to vivid life are an internationally regarded cast of artists: tenor Joshua Guerrero in the title role, soprano Rachel Willis-Sørensen as Elisabeth, mezzo-soprano Clémentine Margaine as Princess Eboli, baritone Igor Golovatenko in his Lyric debut as Rodrigue, bass Dmitry Belosselskiy as King Philippe, and bass Soloman Howard as the Grand Inquisitor.

Guerrero returns following his electrifying Lyric debut as Macduff in last season’s production of Verdi’s Macbeth. Willis-Sørensen, who made her acclaimed Lyric debut as Donna Anna in Don Giovanni in the 2019/20 Season, has cemented herself as an acclaimed Verdian with recent triumphs in leading roles in Il trovatore, La traviata, Otello, and Don Carlo at opera houses around the world. Margaine is bound to captivate Lyric audiences again with her take on Eboli after her stunning Lyric debut as Dulcinée in Massenet’s Don Quichotte in the 2016/17 Season.

Golovatenko’s recent engagements include leading roles at the Metropolitan Opera, Vienna State Opera, and London’s Royal Opera House. Belosselskiy returns to Lyric after his star turn as Prince Gremin in Tchaikovsky’s Eugene Onegin in the 2016/17 Season and his acclaimed debut as Zaccaria in Verdi’s Nabucco in the 2015/16 Season. Howard, a rising young star who made his Lyric debut as Wurm in Verdi’s Luisa Miller in the 2019/20 Season, adds the Grand Inquisitor to his growing list of leading Verdi roles.

Iron sharpens iron. The cast of Don Carlos also features four members of Lyric’s acclaimed artist-development program — the Patrick G. and Shirley W. Ryan Opera Center — in key supporting roles: Denis Vélez as Thibault, Laureano Quant as the Count of Lerma, Alejandro Luévanos as a Royal Herald, and Lindsey Reynolds as the Voice from Above. Peixin Chen, a graduate of the Houston Grand Opera Studio, sings the role of the Monk in his Lyric debut.

A gripping choral performance. Always a standout on the Lyric stage, the singers of the Lyric Opera Chorus — which numbers 84 in Don Carlos — portray inquisitors, ladies and gentlemen of the Spanish Court, pages, guards, monks, and soldiers. They are expertly prepared by Lyric Chorus Master Michael Black to find the deeply expressive colors present in Verdi’s score.

Big opera. Not for the faint of heart. The five-act French version of Don Carlos is a must-see experience for the dedicated opera lover. Witness the incredible scale, rich drama, and lush music come alive on a scale and with forces that can only come from Lyric Opera of Chicago. "Don Carlos is the epitome of grand opera," sums up Freud. "I can't think of a grander opera for audiences to experience than Don Carlos."

The Enrique Circle is comprised of Lyric's most dedicated supporters who are committed to championing Maestro Enrique Mazzola's exciting artistic vision and legacy.