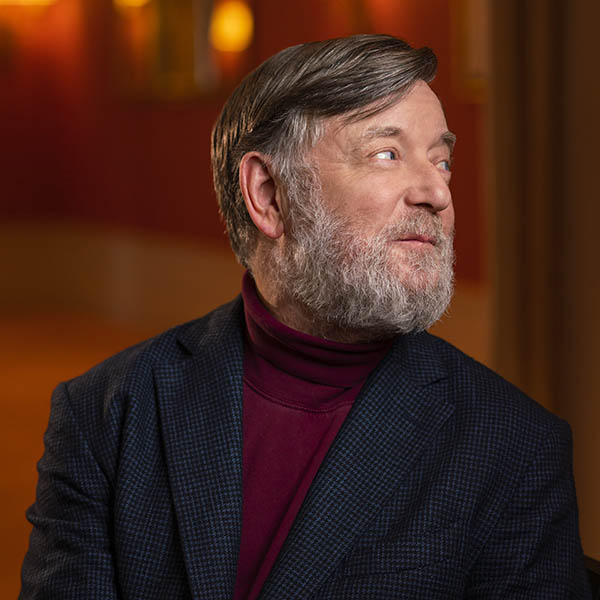 Sir Andrew Davis served as music director and principal conductor of Lyric Opera of Chicago from 2000 through the 2020/21 Season. Since his debut engagement here in the 1987/88 Season, he has led 690 opera performances plus nine special concerts at Lyric, and the majority of Lyric’s free concerts in Millennium Park, as of September 2019. The vast repertoire that he has led at Lyric encompasses operas by Berg, Berlioz, Bizet, Britten, Dvořák, Gilbert and Sullivan, Gounod, Janáček, Lehár, López, Massenet, Mozart, Mussorgsky, Poulenc, Puccini, Rossini, Strauss, Tchaikovsky, Verdi, Wagner, and Weinberg. He returns this season for a special performance of Beethoven’s Symphony No. 9.

From 2013 to 2019 Maestro Davis served as principal conductor of the Melbourne Symphony Orchestra. Since December 2019 he has continued his artistic role there as conductor laureate.

Among Maestro Davis’s major achievements in the 2018/19 Season were performances of Idomeneo, a new production of Siegfried, and the company premiere of Cendrillon at Lyric; Duruflé’s Requiem with Royal Liverpool Philharmonic; Götterdämmerung at the Edinburgh International Festival; and Elgar’s The Music Makers at the BBC Proms.

Through his prolific recordings, his many international tours, and his guest appearances and relationships with several of the finest orchestras and opera companies in Europe, North America, and Australia, Sir Andrew is recognized as one of today’s most acclaimed conductors.

Maestro Davis’s career spans more than four decades, during which he has been the artistic leader at several of the world’s most distinguished opera and symphonic institutions, including the BBC Symphony Orchestra (conductor laureate and chief conductor, 1991-2004, the longest tenure since that of BBCSO founder Sir Adrian Boult); Glyndebourne Festival Opera (music director, 1988-2000); and the Toronto Symphony Orchestra (conductor laureate and principal conductor, 1975-1988), where he serves as interim artistic director through 2020. In addition, he holds the honorary title of conductor emeritus at the Royal Liverpool Philharmonic Orchestra.

Sir Andrew has led performances at many of the world’s most important opera houses, among them the Metropolitan Opera, La Scala, London’s Royal Opera House, the Bayreuth Festival, and the major companies of Munich, Paris, San Francisco, and Santa Fe. In addition to those ensembles, he has appeared with virtually every other internationally prominent orchestra, including the Berlin Philharmonic, Royal Concertgebouw Orchestra, Rotterdam Philharmonic, and all the major British orchestras.

Born in 1944 in Hertfordshire, England, Maestro Davis studied at King’s College, Cambridge, where he was an organ scholar before taking up conducting. His exceptionally diverse repertoire ranges from Baroque to contemporary, and spans the symphonic, operatic, and choral worlds. Sir Andrew is a great proponent of twentieth-century works including those by Janáček, Messiaen, Boulez, Elgar, Tippett, and Britten, in addition to the core symphonic and operatic works. As chief conductor, Sir Andrew has always participated in the creation and premieres of new repertoire and new compositions, personally conducting a great number of them.

In 1992, Maestro Davis was created a Commander of the British Empire, and in 1999 he was designated a Knight Bachelor in the New Year Honours List. He was awarded an honorary doctorate by Knox College in Galesburg, Illinois.

Lyric takes you behind the scenes as Music Director Sir Andrew Davis leads a series of one-on-one master classes with Ensemble members of The Patrick G. and Shirley W. Ryan Opera Center, one of the premier professional artist-development programs in the world. Working with the artists on one of his favorite operas, Mozart's The Marriage of Figaro, Maestro Davis shares detailed insights to help them prepare for international careers.