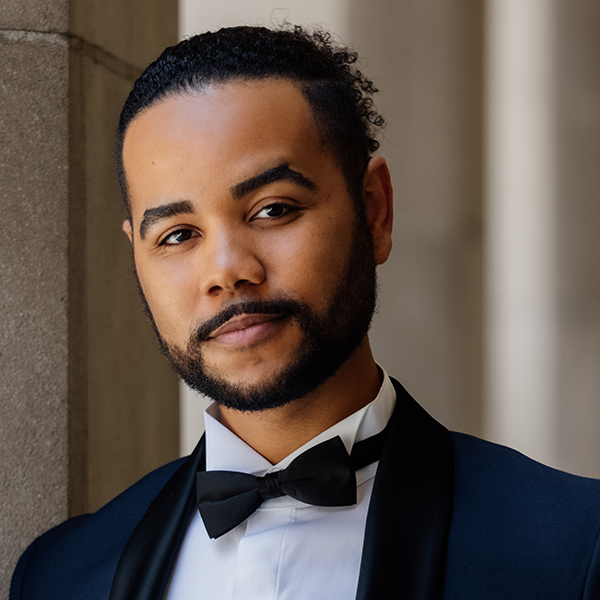 Third-year Ryan Opera Center tenor Martin Luther Clark holds a master’s degree in opera from the Curtis Institute of Music. Among his roles there were the First Sailor/Dido and Aeneas, Tobias Ragg/Sweeney Todd, and Don Ottavio/Don Giovanni. Also on the East Coast, he sang Vaudemont/Iolanta and King Charles/The Maid of Orleans with Russian Opera Workshop (2019 summer season). The previous year, he was heard as a Central City Opera Apprentice Artist and as tenor soloist at the Library of Congress, where he sang both published and unpublished works of Leonard Bernstein for the centennial celebration of the composer’s birth. Other appearances have included Lyric Opera of Kansas City (Resident Artist), University of North Texas Opera (numerous roles and galas), The Dallas Opera, Charlottesville Opera, Opera in Concert, Opera North, and Wolf Trap Opera. Originally from Marshall, Texas, Clark has received an Encouragement Award from the Metropolitan Opera Laffont Competition (2018), First Place in the Bill and Margot Winspear Opera Scholarship Competition (2014), and First Place in the NATS Vocal Competition, Division VI (2013).

For Lyric’s 2020/21 virtual programming, Clark performed in Lawrence Brownlee and Friends: The Next Chapter, Creating The Factotum, Sole e Amore, Magical Music Around the World, and Rising Stars in Concert.

In 2021/22 for the company he appeared in Sunday in the Park with Lyric’s Rising Stars and performed First Armored Man/The Magic Flute and Adult William and Chicken Plucker/Fire Shut Up in My Bones.

In Lyric's 2022/23 season, he will appear in the company's world premiere of Proximity.