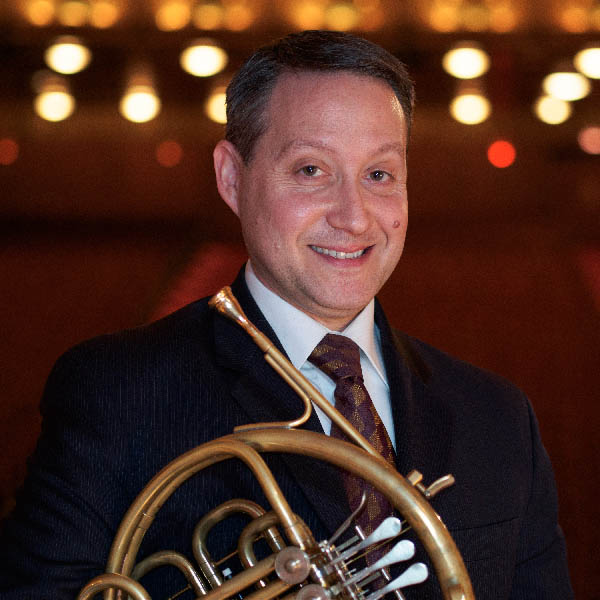 Neil Kimel's career as a horn player began as anything but a traditional or predictable one. After receiving a B.A. in Cinema Studies from the University of Wisconsin – Milwaukee, he was invited to join the New World Symphony in Miami Beach, Florida where he performed under the baton of its music director, Michael Tilson Thomas. Neil then returned to his home town of Chicago where diverse performance opportunities included backing up various acts on Oprah Winfrey's popular television show, flying to Hawaii to perform with soprano Charlotte Church, playing in a pit for a Broadway show in New York City, and recording numerous commercial jingles. Summers were filled with performances with many festival orchestras including Spoleto USA, the National Orchestral Institute, and the Tanglewood Music Center where Mr. Kimel was awarded both the C.D. Jackson Memorial Prize and the Harry Shapiro Award for Outstanding Brass Playing. He then won the position of second horn with Chicago's Grant Park Orchestra in 2000 with whom he has recorded numerous times. The winters found Mr. Kimel fleeing Chicago's cold and snow for sunshine and warmth as third horn with the Sarasota (FL) Opera Orchestra. Additionally, Neil has performed with the Symphony Orchestras of Kansas City, Nashville, Milwaukee, St. Louis, Toronto, Chicago and the Cleveland Orchestra with whom he toured to Vienna playing in the famed Musikverein.

Sir Andrew Davis appointed Mr. Kimel as second horn of the Lyric Opera Orchestra of Chicago in 2008. When Neil leaves the opera pit, he is the principal horn of the Chicago Philharmonic with whom he has appeared as soloist, a member of Tower Brass of Chicago, as well as a chamber music coach at Northwestern University and Adjunct Professor of Horn at DePaul University. Privately and in masterclasses around the country, Mr. Kimel coaches musicians of all instruments in audition preparation and mental techniques that lead players to a more consistent performance.