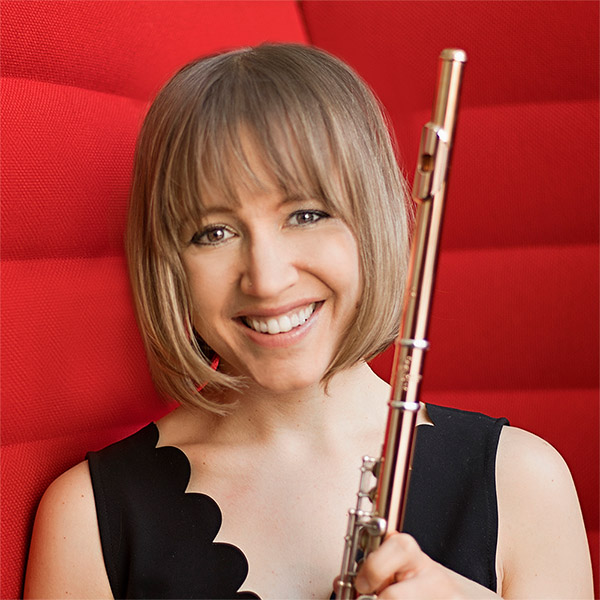 Marie Tachouet is Principal Flute of the Lyric Opera of Chicago orchestra. She serves on the flute faculty at Roosevelt University's Chicago College of Performing Arts and on the chamber music faculty at Northwestern University's Bienen School of Music. Marie has performed as principal flute with the Seattle Symphony, San Diego Symphony, and Milwaukee Symphony, and has also performed with the Pittsburgh and Oregon symphonies. Prior to her appointment in Chicago, Marie was Principal Flute of the Sarasota Opera Orchestra and held acting principal flute roles with the Santa Fe Opera and Pittsburgh Opera orchestras.

An advocate of contemporary music, Marie has worked closely with composers including Charles Wuorinen, Elliot Carter, James Stephenson, and John Zorn in venues such as the Library of Congress, Carnegie Hall, the Guggenheim, and the National Flute Association. Praised by the New York Times for her “extraordinary agile” solo playing, she has been a soloist with the Artosphere Festival Orchestra, Chicago Philharmonic, Olympia Symphony, Tanglewood Music Center Orchestra, Akron Symphony., and University of Michigan Symphony Band. Marie frequently leads guest masterclasses at universities and has been a guest faculty member at The Consummate Flutist and Credo Flute workshops. Marie collaborated with Price & Co. Publishing as the flute editor for Book of Arias, a collection of 33 opera arias transcribed for flute that was released in May 2021.

“I love playing grand opera because it reminds us that music making – and life – is always a collaborative effort. Nothing compares to being in the middle of a powerful orchestra while simultaneously being enveloped by the voices of world-class artists above. The winds have the best seat in the house!”