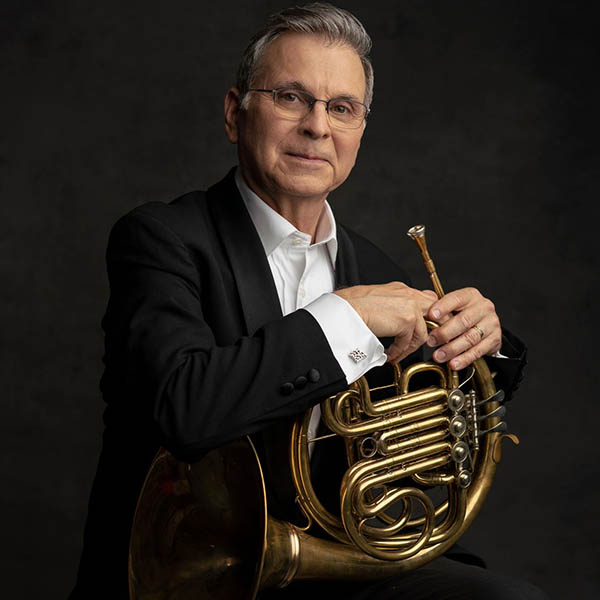 Jonathan Boen has held the position of Principal Horn with the Lyric Opera of Chicago since 1979 and the Grant Park Orchestra since 1998. He began his career with the Denver Symphony at the age of 21, and is the former Principal Horn for the Music of the Baroque and Chicago Philharmonic orchestras. He has served as Guest Principal Horn for the Dallas and Milwaukee Symphonies and the Santa Fe Opera. Mr. Boen has performed with the Chicago Symphony and with the Israel Philharmonic at the request of Zubin Mehta, and with the Chicago Brass Quintet, Chicago Chamber Players, Rembrandt Chamber Players, Contemporary Chamber Players, MusicNow, Colorado College Summer Festival, Sanibel Music Festival and Midsummer’s Music.

Widely recognized as one of the most technically proficient players, his experience at the opera adds a layer of soaring lyricism to his interpretations not commonly found in performances today. As guest Principal Horn for the Dallas Symphony, critical acclaim from Paul Robison hailed Mr. Boen: "...the horn section never sounded better. The playing of each of the five was virtually flawless...this was some of the most glorious horn ensemble playing I have ever heard.” Gregory Sullivan Isaacs adds: "Special kudos have to go to the horn section under the leadership of guest principal Jonathan Boen...and a special gold star must go to the horn trio that accompanied Leonora's big aria 'Abscheulicher!' It has rarely, if ever, been better played."

In demand as both a recitalist and orchestral soloist, Mr. Boen is especially known for his performances of works by J.S. Bach, Beethoven, Brahms, Britten, Cherubini, Handel, Mozart, Poulenc, and Strauss.

To critical acclaim, he premiered Jan Bach's Horn Concerto in 1983, a work written for him by the late renowned Illinois composer. In 2004, Mr. Boen revived the concerto in a historic performance and recording - under the Equilibrium Records label - with the Chicago Philharmonic under the direction of Maestro Larry Rachleff. On January 15, 2023, he will perform the Concerto in a newly revised version with The Santa Fe Symphony.

In 2017, Jonathan Boen performed the world premiere of the “Legacy” horn concerto by Grammy and Pulitzer Prize-winning composer Aaron Jay Kernis with Maestro Carlos Kalmar and the Grant Park Orchestra in Millennium Park. The horn concerto was commissioned jointly by the Grant Park Music Festival and the Liverpool Symphony Orchestra (UK) for their principal hornists.

Mr. Boen recently released his latest recording entitled  “French Horn Recital from 24 Preludes, Op. 11 by Alexander Scriabin” with pianist Craig Terry on the Orpheus Classical label. His original horn/piano transcriptions of the Preludes are available on Spotify, Apple Music, and most streaming sites. Jonathan Boen’s artistry has been heard in multiple live WFMT Chicago radio broadcasts with the Lyric Opera, Grant Park and Music of the Baroque orchestras. He has been active in Chicago's commercial recording studios, having performed more than 1,000 jingles for radio and television airing nationwide. Jonathan also was a featured guest on the Studs Terkel program in 1983.

Mr. Boen has given master classes throughout the United States, England, and Japan. He currently serves on the faculty of Northwestern University in Evanston, Illinois.

“The collective institutional musical knowledge of the Chicago Lyric Opera Orchestra allows us to be stylistic chameleons when rotating through the season’s productions. This is an attribute I highly value, and I respect the flexibility and high standards of my colleagues. This is what makes our orchestra a world class ensemble.”