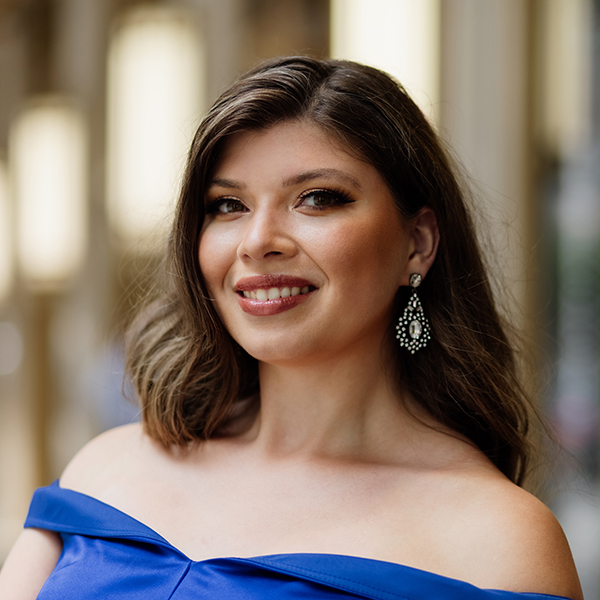 A native of Traverse City, Michigan, the third-year Ryan Opera Center mezzo-soprano will appear this season at Lyric in Carmen and Proximity. As a member of the 2019/20 Detroit Opera Studio, she was heard as the Sandman/Hansel and Gretel, the Old Lady/Candide, the Mother/Amahl and the Night Visitors, and Mae/The Grapes of Wrath. In 2018 and 2019 she participated in The Santa Fe Opera’s Apprentice Singer program. Competition successes include National Semi-Finalist in the 2020 Metropolitan Opera Laffont Competition, Finalist and Online Viewers’ Choice Award winner in Houston Grand Opera’s 31st Eleanor McCollum Competition, and participant in the internationally celebrated Neue Stimmen Competition in Gütersloh, Germany. Following studies at Michigan State University, DeYoung received a master’s degree in voice performance from the University of Houston, where she portrayed Isabella/L’italiana in Algeri, Fidalma/The Secret Marriage, Gertrude/Romeo and Juliet, Elizabeth Proctor/The Crucible, and Lady Sneerwell/Robert Nelson’s The School for Scandal (world premiere)

During the 2020/21 season DeYoung appeared in the Ryan Opera Center’s virtual programs Sole e Amore with Enrique Mazzola, Magical Music Around the World, and Rising Stars in Concert.

At Lyric during the 2021/22 season, DeYoung performed in Sunday in the Park with Lyric’s Rising Stars and as Second Lady/The Magic Flute.

During the 2022/23 Lyric season, in addition to appearing in Ernani and Carmen, DeYoung will also appear in Proximity, Lyric’s world-premiere triple bill of new American operas.