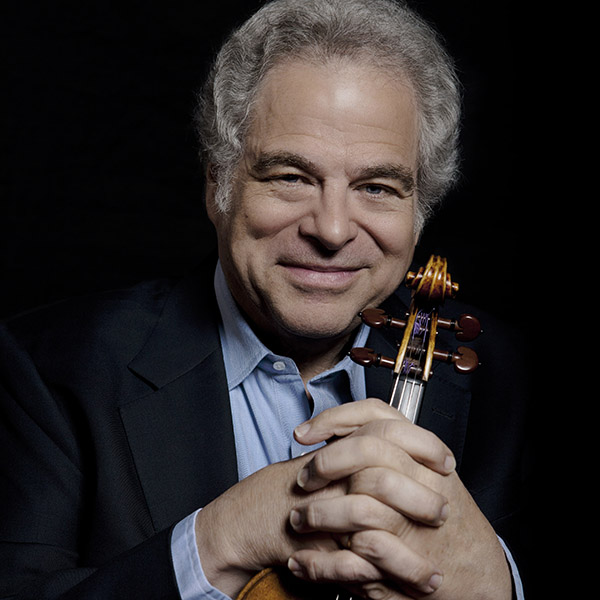 Undeniably the reigning virtuoso of the violin, the Israeli violinist enjoys superstar status rarely afforded a classical musician. Beloved for his charm and humanity as well as his talent, he is treasured by audiences throughout the world who respond not only to his remarkable artistry, but also to his irrepressible joy for making music. Having performed with every major orchestra and at venerable concert halls around the globe, Perlman has been awarded the Presidential Medal of Freedom, the Genesis Prize, a Kennedy Center Honor, the National Medal of Arts, and the Medal of Liberty.

Perlman’s recordings have garnered 16 Grammy Awards and regularly appear on the bestseller charts. In 2008, he was honored with a Grammy Lifetime Achievement Award for excellence in the recording arts. He has long been a major presence in the performing arts on television and has been honored with four Emmy Awards, most recently for the PBS documentary Fiddling for the Future, a film about his work as a teacher and conductor for the Perlman Music Program. In 2004, PBS aired a special entitled Perlman in Shanghai, documenting the Perlman Music Program’s historic visit to China, culminating in a concert at the Shanghai Grand Theater and a performance with 1,000 young violinists. Perlman’s third Emmy recognized his dedication to klezmer music, as profiled in the 1995 PBS television special In the Fiddler’s House, which was filmed in Poland and featured him performing with four of the world’s finest klezmer bands.

Perlman has entertained and enlightened millions of TV viewers of all ages on popular shows as diverse as The Late Show with David Letterman, Sesame Street, The Frugal Gourmet, The Tonight Show, and various Grammy telecasts. His PBS appearances have included A Musical Toast and Mozart by the Masters, as well as numerous Live from Lincoln Center broadcasts such as The Juilliard School: Celebrating 100 Years. In 2008, he joined renowned chef Jacques Pépin on Artist’s Table to discuss the relationship between the culinary and musical arts, and lent his voice as the narrator of Visions of Israel for PBS’s acclaimed Visions series.

One of Perlman’s proudest achievements is his collaboration with film composer John Williams in Steven Spielberg’s Academy Award-winning film Schindler’s List, in which he performed the violin solos on the soundtrack. Perlman also has a long association with the Israel Philharmonic, having participated in many groundbreaking international tours with that orchestra. In 1987, he joined the IPO for history-making concerts in Warsaw and Budapest, representing the first performances by this orchestra and soloist in Eastern bloc countries. He again made history as he joined the orchestra for its first visit to the Soviet Union in 1990, and was cheered by audiences in Moscow and Leningrad who thronged to hear his recital and orchestral performances. This visit was captured on a PBS documentary entitled Perlman in Russia, which won an Emmy.

A native of Tel Aviv, Perlman is an alumnus of the city’s Academy of Music as well as The Juilliard School, where he studied with two legendary teachers, Ivan Galamian and Dorothy DeLay. He currently holds the Dorothy Richard Starling Foundation Chair at Juilliard.