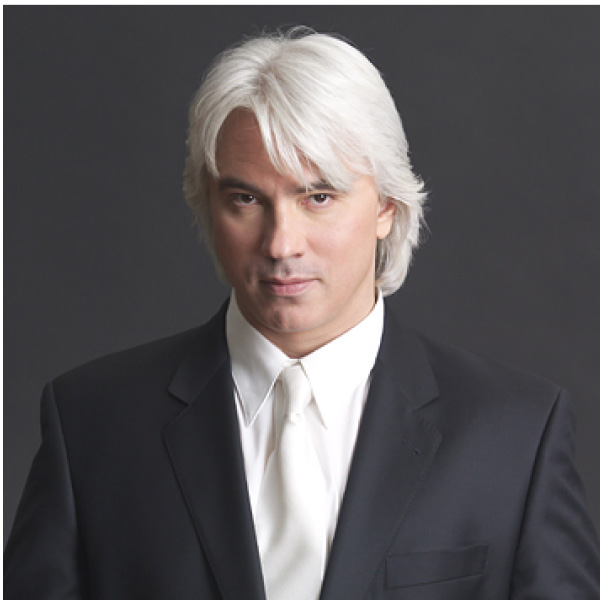 The internationally acclaimed Russian baritone was born and studied in Krasnoyarsk, Siberia. In 1989, he won the prestigious BBC Cardiff Singer of the World Competition. From the start, audiences were bowled over by his cultivated voice, innate sense of musical line, and natural legato. After his Western operatic debut at the Opéra de Nice as Prince Yeletsky/ Tchaikovsky’s The Queen of Spades, his career exploded to take in regular engagements at the world’s major opera houses and appearances at renowned international festivals. He made his American operatic debut at Lyric in 1993|94 in La traviata. Hvorostovsky rapidly became a favorite at major houses worldwide, including the Royal Opera House-Covent Garden, New York’s Metropolitan Opera, the Opéra National de Paris, the Bavarian State Opera in Munich, the Salzburg Festival, La Scala in Milan, and the Vienna State Opera. Roles for which the baritone is most noted include Count di Luna/Il trovatore, Posa/Don Carlo, Rigoletto, Simon Boccanegra, Renato/ Un ballo in maschera, Prince Yeletsky, and Eugene Onegin. A celebrated recitalist in demand worldwide – from the Far East to the Middle East, from Australia to South America – Hvorostovsky has appeared at such venues as Wigmore Hall, London; Queen’s Hall, Edinburgh; Carnegie Hall; La Scala; the Tchaikovsky Conservatoire in Moscow; the Gran Teatre del Liceu in Barcelona; Tokyo’s Suntory Hall; and the Musikverein in Vienna. The singer performs in concert with top orchestras such as the New York Philharmonic and the Rotterdam Philharmonic. Among the renowned conductors with whom he has regularly collaborated are the late Claudio Abbado, Valéry Gergiev, Bernard Haitink, James Levine, the late Lorin Maazel, Zubin Mehta, and Yuri Termikanov. Hvorostovsky retains a strong musical and personal contact with Russia. He became the first opera singer to give a solo concert with orchestra and chorus on Red Square in Moscow; this concert was televised in more than 25 countries. The baritone has gone on to sing a number of prestigious concerts in Moscow as a part of his own special series, “Dmitri Hvorostovsky and Friends.” He has invited such celebrated artists as sopranos Renée Fleming, Barbara Frittoli, Sumi Jo, and Sondra Radvanovsky, tenors Jonas Kaufmann and Marcello Giordani, and bass Ildar Abdrazakov. In 2005 and 2015 Hvorostovsky undertook historic tours throughout the cities of Russia at the invitation of President Putin, singing to crowds of hundreds of thousands of people to commemorate the soldiers of the Second World War. He has established an important collaboration with the Russian popular composer Igor Krutoi, with very successful concerts in Moscow, St Petersburg, Kiev, and New York.

The baritone’s extensive discography spans recitals and complete operas. He has also starred in Don Giovanni Unmasked, an award-winning film (by Rhombus Media) based on the Mozart opera, tackling the roles of both Don Giovanni and Leporello. Recent CD recordings include “Wait for Me” (Russian war songs with orchestra, conducted by Constantine Orbelian) and Simon Boccanegra (with Barbara Frittoli, Ildar Abdrazakov, and Stefano Secco, also with Orbelian conducting), both of which have been met with much critical acclaim. For a complete discography, please visit his website, hvorostovsky.com.