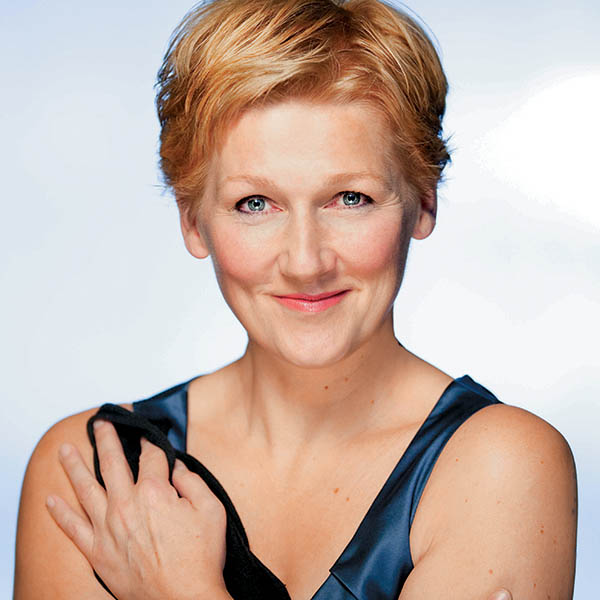 In her repertoire of leading dramatic roles, what most interests the renowned German soprano (as she explained for the Vienna State Opera’s website) is “to experience these parts and work on them anew. I prepare very well, I read a lot, I inform myself about the roles’ background. But spontaneous feeling has its place; I definitely and gladly take unplanned risks, to give a role a color in the moment. Onstage, when one has a partner who also works out of spontaneous experience, wonderful moments can result, in which one can create something fresh.” Denoke maintains close associations with prestigious companies including the ViennaState Opera (ten starring roles to date by Wagner, Strauss, Tchaikovsky, Janáček, and Shostakovich), the Opéra National de Paris, the Berlin State Opera, the Bavarian State Opera in Munich, and the Salzburg Festival. One of her signature roles, Emilia Marty/The Makropulos Affair, brought her a triumph in her La Scala debut. She has also been hailed at the Metropolitan Opera (Der Rosenkavalier), Covent Garden (Parsifal, Erwartung, The Gambler, Salome), and the major houses of Dresden, Madrid, Barcelona, and Zurich. In addition to the Chicago Symphony Orchestra, she has been heard with the leading orchestras of London, Munich, Boston, and Berlin. Among her most significant recordings are The Makropulos Affair (Salzburg), Salome (BadenBaden), and Alceste (Madrid) on DVD and Wozzeck, Fidelio, and Die tote Stadt on CD. The latest of Denoke’s recitals, devoted to Kurt Weill and his time, premiered at the 2015 Salzburg Festival. A Kammersängerin of the Vienna State Opera since 2009, Denoke was voted 1999 Singer of the Yearby Opernwelt magazine and received the 2007 Deutsche Theaterpreis Der Faust for her greatly acclaimed portrayal of Salome.