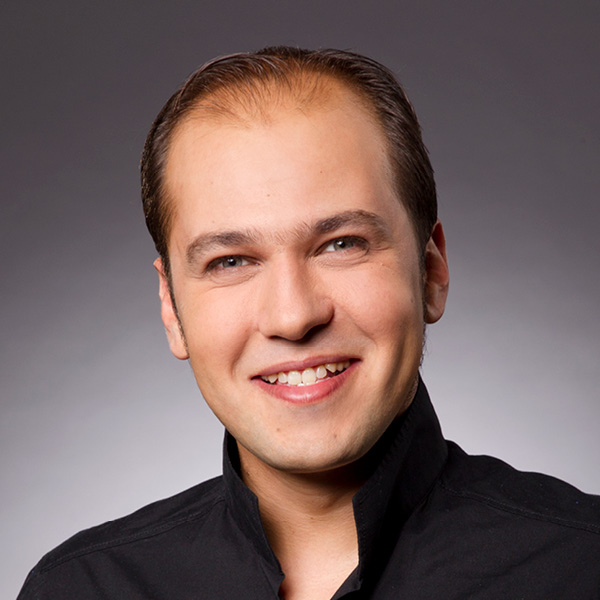 The Romanian bass, who has rapidly risen to international prominence, made his stage debut as Colline/La bohème at the National Opera in his hometown, Cluj-Napoca. Guest engagements followed at the Opéra de Monte Carlo, the Opéra National de Paris, the Opéra de Bordeaux, Rome’s Teatro dell’Opera, the Teatro Massimo in Palermo, the Teatro La Fenice in Venice, the Deutsche Oper am Rhein/Düsseldorf-Duisburg, and the state operas in Hamburg, Berlin, and Munich, in roles such as Alidoro/Cinderella, Don Basilio/ The Barber of Seville, Philip II/Don Carlo, and Sparafucile/Rigoletto. In his still-young career Sâmpetrean has already earned successes at La Scala in the title role/Verdi’s Oberto and Banco/ Macbeth; the Salzburg Festival as Ferrando/ Il trovatore and Leporello/Don Giovanni; the Aix-en-Provence Festival as Selim/Il turco in Italia; the Verona Arena as Ramfis/Aida; the state operas of Hamburg (Raimondo/Lucia di Lammermoor) and Berlin (Ferrando); and the Teatro La Fenice in the title role/Don Giovanni. As Leporello in the latter opera, he also appeared in Amsterdam, Berlin, Prague, Moscow, Paris, Monte Carlo, and Hamburg. Sâmpetrean will be featured later this season as Count Walter/Luisa Miller in Monte Carlo, Leporello at France’s Chorégies d’Orange Festival, and Alidoro in Rome.