Welcome to Lyric. Your new seat awaits you!

When performances resume at the Lyric Opera House, a new seating plan will be waiting for you in the Ardis Krainik Theatre. Thanks to a generous gift from an Anonymous Donor in support of Lyric's Patron Accessibility Initiative, brand new seats are set to be in place throughout the house.

At the conclusion of this exciting new renovation project, the opera house will open with

We look forward to welcoming you back when we open our doors and hope you enjoy your performances in our newly improved theater.

We worked with theater seat consultants, acoustic engineers, and leading architects to construct seats that combine pleasing looks and ergonomic designs to keep you comfortable from the first note of the overture to the final bows. With aesthetics and sound in mind at every step of the planning, none of the theater's art-deco ambiance or sopranos' high Cs will be compromised.

In addition to providing a more comfortable chair, the new seating configuration on Lyric's Main Floor will offer an offset design for improved sightlines to the stage that offers a parallel experience to the graduated seating design of the balconies. Addtionally, broader aisles will improve theater entrance and exit flow, and the front of the Main Floor will have increased legroom.

Scroll over the photo below to view the difference between the new and current sightlines. On mobile, click the photo then click off to toggle. 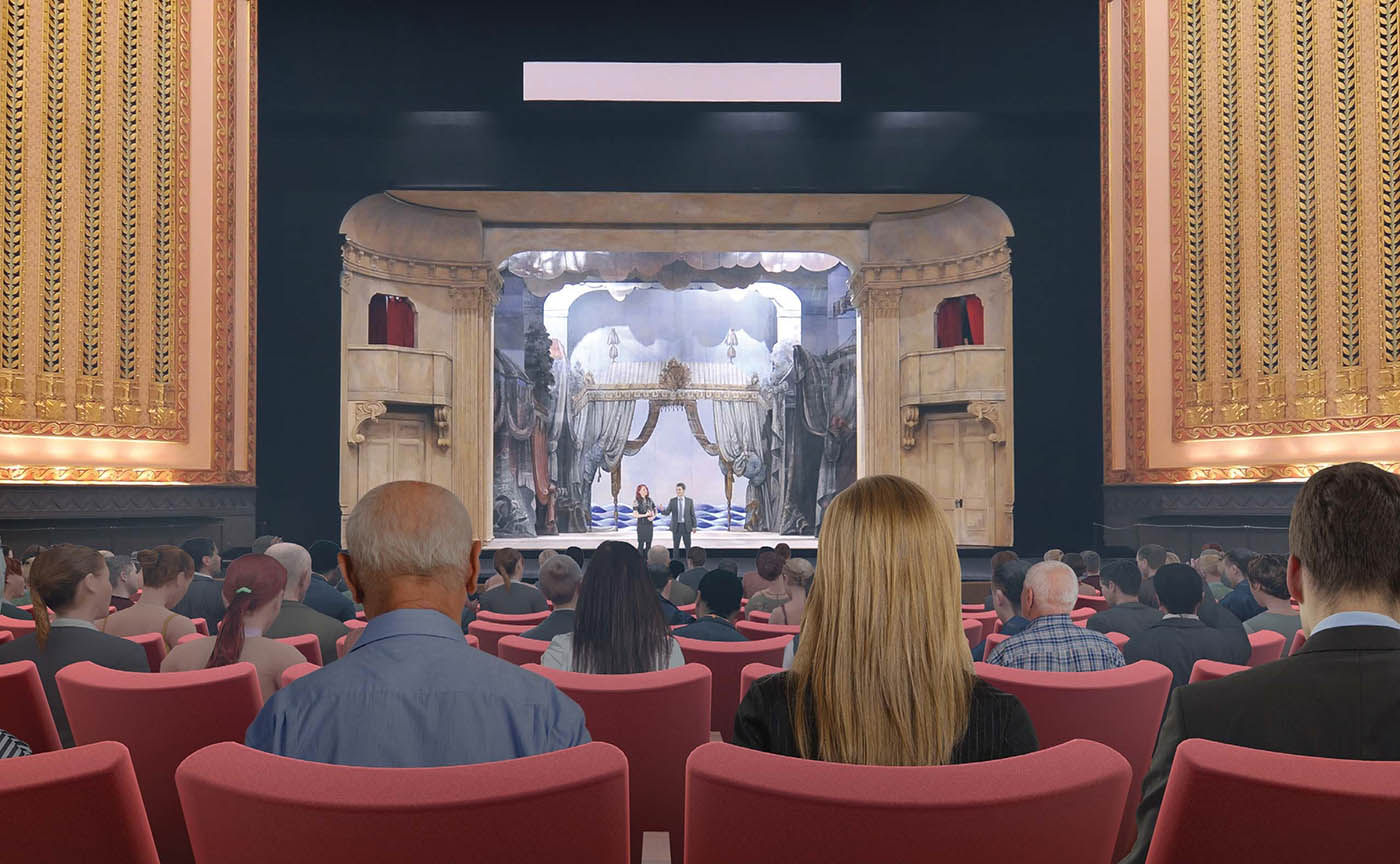 Our new theater configuration will be more accessible than ever before. Wider aisles on the Main Floor will allow more room for all patrons to move around the house and an increased number of wheelchair accessible seats will be made possible with the ability to remove additional chairs as needed.

LCM served as an ADA consultant on this project to ensure accessibility compliance.

Lyric has selected a new, state-of-the-art seat with outstanding aesthetics, acoustic characteristics, and comfort. The seat provides a molded foam back that offers subtle lumbar support, an ergonomically pleasing design for maximum comfort, and a patented silent seat gravity lift system that is engineered for quiet open and close. The seats are also designed to look beautiful in our historic opera house and to maintain comfort, alignment, and appearance over a long period of use. 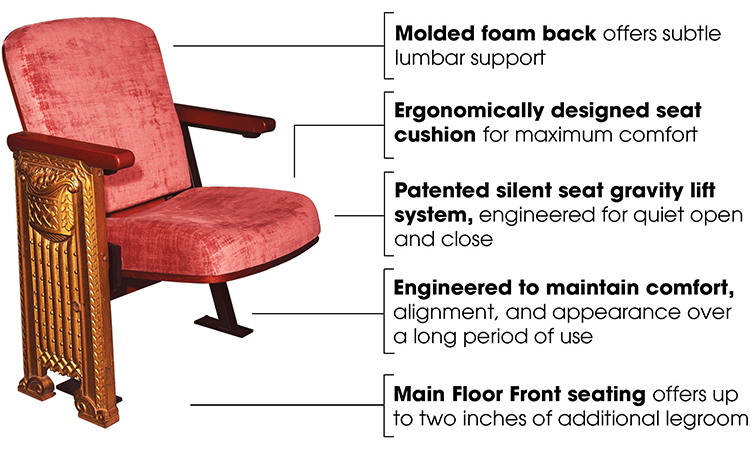 We are thrilled about this opportunity to elevate the Lyric experience for all our guests.

Lyric is committed to improving and maintaining this historic building to the highest standard, without altering the house's visual beauty. We are enormously grateful for the generosity of the Anonymous Donor, whose commitment to helping maximize Lyric's accessibility to all audiences while enhancing the overall experience in the opera house, has made this possible. As a jewel of Chicago's cultural and architectural community, Lyric is committed to preserving and enhancing the historic art deco building. This new seating plan will provide accessibility and upgrades in comfort while ensuring that the house's acoustics will remain one of the finest in the nation.”

As a leader in our community and in our field, it is imperative that we take all possible measures to ensure that Lyric can be experienced and enjoyed by everyone who passes through our doors.

We know this new seating plan will continue to maintain and improve our treasure of an opera house and enhance the enjoyment of it for all.”

David Ormesher, chairman of the Lyric Board of Directors

Renovations were originally set to begin on June 30, immediately following the final performance of 42nd Street, and conclude just before Opening Night of our 2020/21 Season in September. However, when the realities of COVID-19 came crashing down last spring, we were forced to develop multiple contingency plans to ensure the project's continuation while also protecting the health of everyone involved. The project was in a constant state of flux from March 13 through June 15, as we made adjustments to our construction and work schedules as well as to our site safety plans in accordance with city and state mandates.

After a long research process, we ultimately selected a state-of-the-art seat design with outstanding aesthetics, acoustic characteristics, and comfort made by Series Seating. The seat provides a molded foam back that offers subtle lumbar support, an ergonomically pleasing design for maximum comfort, and a patented silent seat gravity lift system that is engineered for quiet open and close. Series Seating also sets the bar for environmentally responsible manufacturing. Their facility, located outside Bogotá, Colombia, produces zero pollution and virtually no waste.

As a result of a government-mandated shutdown due to rising infection rates of COVID-19, our seating vendor stopped all production on our seats from March 24 to April 13. During this time, we worked together to implement our jointly developed contingency plans, initiating new safety procedures and manufacturing-operation changes. Once work was allowed, the production facilities ran two full, socially distanced production shifts. It also hired additional cleaning staff to continually sanitize its facilities, and implemented new employee health and safety protocols, including virus testing.

As soon as we received word that our shipment of seats was on its way to Chicago, IATSE Local 2 stagehands began removing the old seats from the main floor and balconies of the Ardis Krainik Theatre. The gilded end panels were carefully removed from each aisle seat and shipped to Series Seating’s facility in North Carolina, where they were powder coated and modified to fit our new seats. The end panels are original to the theater, and have not been touched since 1996, when they were repainted for the first time since they were installed in 1929. Originally, only every other end panel included an aisle light. The most obvious modification will be the addition of LED lights to each end panel—improving visibility and the overall safety of our walkways.

More than 3,500 old seats were packed into shipping containers to be stored at our south-side warehouse until we are able to find them a new home. From the very beginning, we knew we wanted this project to be as "green" as possible. Our various vendors, suppliers, and contractors are similarly committed to sustainable construction and business practices. Most of our construction waste is being recycled or reused, and thankfully we were able to "upcycle" our existing 288 box-seat chairs. These movable seats are being completely remade by The Furniture Shop, Inc., a south-side Chicago-based artisanal furniture refurbishing, refinishing, and upholstery firm, specializing in fine furniture preservation and repair.

As our stagehands completed the removal of the old seats from the theater, Bully & Andrews personnel began erecting protective barriers throughout the theater. All lobby floors, stairways, and walls were covered. Further, all brass fixtures were protected with bubble wrap, all artwork was removed and safely stored, and all light fixtures had their glass covers removed and stored by our stagehands for protection.

As any HGTV fan knows, even the most beautiful old homes can have their surprises and setbacks. For our house, that was finding a patch of lead paint on the main floor of the theater. After the space was cleared, we brought in a specialized team from National Decorating Service to handle the removal. This required setting up containment tents that could be ventilated with sophisticated HEPA filters and shifting other work to unaffected areas of the opera house. While the abatement team—working in full hazmat protective equipment—operated in these tents, removing the contaminated paint from the floor using grinders and filtered vacuums, Block Electric workers were installing new electrical power panels in the basement and running new wiring into the balconies. This work was required in order to accommodate the new aisle lighting and to add electrical outlets for our new technical table locations (which are in place during rehearsal periods).

Our concrete contractors drilled holes for updated electrical wiring and our new HVAC return air vents. With that complete, they began re-sculpting the main floor aisles and leveling out the surface using a customized concrete formula poured into prepared wooden frames. The main floor cross-aisle (formerly Row AA) was moved toward the back of the theater and four rows near the stage were adjusted to bring the slope of the lower portion of the theater to the necessary height.

By reducing the overall number of seats in the theater, we are able to accommodate larger wheelchair platforms, provide wider seats, and more legroom. The new seats from Series Seating are the most ergonomically comfortable theater seating on the market. They facilitate "active sitting," which increases blood circulation, reduces back strain, joint stiffness, and muscle strain when sitting for long periods of time.

In addition to providing a more comfortable chair, the new seating configuration on Lyric's main floor follows an offset design for improved sightlines to the stage that offers a parallel experience to the graduated seating design of the balconies.

We used a high-performance concrete, formulated specifically for this project. By increasing its durability and shortening its "cure" time, we were able to paint our new concrete floors within seven days of pouring them, and bolt our seats to these floors within two weeks of the pour.

The most obvious change you will notice upon entering the theater is the new layout of the main floor. The newly curved aisles will be brighter, wider, and more accessible. Working with our disability platforms manufacturer Staging Concepts, and many consultants and engineers, we have greatly increased our wheelchair seating. Nineteen state-of-the-art movable disability platforms will be installed throughout the theater on all floors, with the exception of the Mezzanine (which already has movable chairs). We will also have 11 additional fixed wheelchair locations, as well as 45 removable aisle seats. Wheelchair-bound patrons will also no longer be relegated to "the wings" of the theater, with new platforms installed along the second, third, fourth, and fifth aisles of each floor.

In early October, our dedicated stagehands, assisted by a crew from Series Seating, began installing the new seats in the balconies. As the floors were painted, and new anchor bolts were installed, seating installation moved to the main floor.

With a final count of 3,276 beautiful new seats, we can't wait to roll out the red carpet and welcome you home to the Lyric Opera House.

Questions you may have about Lyric’s seating announcement: